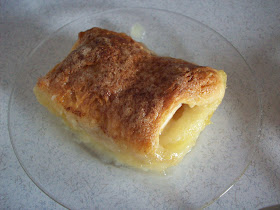 I think this is one of my favorite desserts now. It's so delicious and simple to make. It just melts in your mouth...yummy!!!

You will need:
2 medium/large sized apples
1 can of Pillsbury Grands (I used Southern Style)
1 stick of butter
3/4 cup sugar
1 tsp vanilla
cinnamon
1 12oz can of Vault

1. Peel and core the apples. Cut each apple into four slices.
2. Remove the biscuits from the can. Flatten them out with your hands to make an oval shape.
3. Roll each slice of apple in a biscuit. Place in a buttered baking dish. I used an 8x8, but then I had to put 2 of the dumplings in another pan because I ran out of room.
4. In a saucepan, melt the butter. Stir in the sugar and vanilla.
5. Pour sugar mixture over the dumplings, making sure to coat each thoroughly.
6. Pour the Vault (the original recipe actually calls for Mt. Dew, but we only had Vault...I'm sure it tastes about the same though) around the edges of the pan. I also poured some down the center.
7. Sprinkle with cinnamon.
8. Bake at 350 degrees for about 40 minutes, until golden brown.
9. Serve warm, with ice-cream or whipped cream. 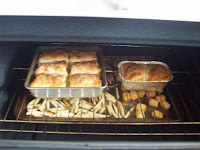 I was multi-tasking, and baked the dumplings and french fries at the same time :) 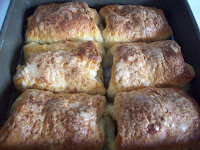 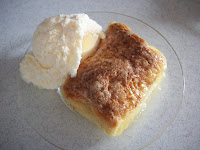 Served with a side of vanilla ice-cream...who can resist?