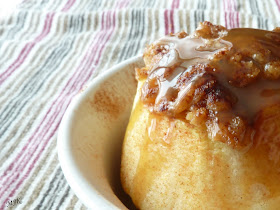 We had lots of apples in the house the other day so I was trying to come up with a use for them. I had seen a recipe before for baked bananas with Heath bar crumbles and caramel, and that was actually part of the inspiration for this recipe. (The other inspiration? You guessed it--apple crisp!) The more I thought about it, the more clear the picture in my head became of what I wanted to make. This was such an easy recipe, I threw it together in about 10 minutes and the house smelled wonderful as the apples baked.

I think these were fabulous. I topped mine with warm caramel sauce, and Mike had a few scoops of vanilla bean ice-cream with his. You can bake these in a baking dish, or in individual ramekins like I did. I would recommend eating these the day they're made. I had one the next day and the "crisp" part became more like a bowl of oatmeal! (It still tasted good, just not the texture I was going for!) 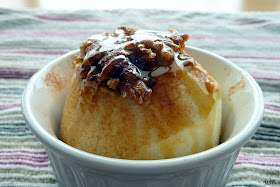 1. Peel and core apples. If you don't have an apple corer (I don't), here's what I did: Use a sharp pearing knife to cut around where the core is. Then I used a grapefruit spoon to scoop out the apple.
2. Mix together oatmeal, margarine, brown sugar, and cinnamon.
3. Spoon oatmeal mixture into the wells in your apples.
4. Sprinkle apples with cinnamon sugar.
5. Place apples in baking dish and bake at 350 for 45 minutes.
6. Top with caramel sauce and/or ice-cream. Serve warm.