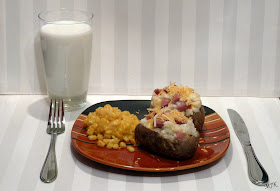 I came across this recipe a while back and thought it looked fabulous! Mike and I eat a lot of potatoes, I fix them in many different ways, but I had never made twice-baked potatoes. My dad has, we used to have them on special occasions, and I know they're delicious! When I saw these potatoes I knew they would be perfect for Mike and I, a simple one dish meal. I made quite a few changes to the original recipe (mostly substituting healthier ingredients), and Mike and I both really liked these.

1. Cook potatoes in microwave until baked through.
2. Cool potatoes until they can be easily handled.
3. Scoop the insides out of each potato, leaving enough potato near the skin to form a sturdy shell. I did this by cutting an oval in the middle of the potato and then scooping out the potato with a spoon.
4. Place insides in a mixing bowl and add sour cream, cheese, and garlic. Whip until potato mixture is creamy.
5. Slice the sausage rope down the middle lengthwise. Then slice each half in half again lengthwise. Dice sausage into small pieces.
6. Stir sausage into potato mixture.
7. Scoop potato mixture into potato shell. Rub potato shell with olive oil and sprinkle with salt to create a crispy potato shell.

8. Place each shell in a baking dish and bake at 350 about 20 minutes, until potatoes are hot.
9. Sprinkle with cheese before serving.
Adapted from: A Southern Fairytale 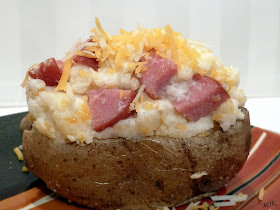