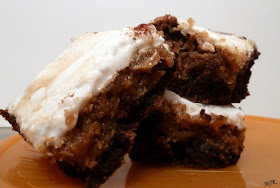 I volunteered to bring dessert for our couple's group tonight.  I had some homemade marshmallows in the house and I wanted something rich and chocolaty.  I combined the two ideas and came up with these brownies.  They were a huge hit and I'll definitely be making these again!

If you wet a knife with water before cutting, it will keep the marshmallow from sticking.