Mike and I are both huge fans of chicken alfredo.  In fact, when we were dating it was one of the first meals I made for him.  He came over to my parent's house for dinner and I did my best to make a good impression!  Unfortunately, I messed something up because the alfredo sauce was way too salty!  We all did our best to eat what we could, but it was the worst alfredo I've ever had.  Mike must have liked something though, because he stuck around!

Don't worry, this recipe isn't too salty.  What I like about chicken alfredo is how versatile it can be.  Mike and I invited both of our families over for a Sunday dinner and I planned to make chicken alfredo.  I knew I wouldn't have time to make it after church, and before everyone arrived, so I actually made the alfredo the night before.  I then put it into a casserole pan and the next day we just had to heat it up before eating.  If you don't want to do the casserole version, you can also serve this alfredo normally, with the sauce poured over the noodles.  Either way, it still tastes great! 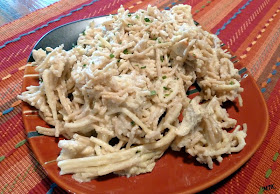 2.  In a small saucepan, combine chicken stock and milk.  Bring to a simmer.

3.  Remove about 1/2 a cup of the chicken stock/milk mixture from the pan and pour it into a small bowl.  Add flour and stir to make a thin paste.  Pour the paste into the saucepan with the remaining chicken stock/milk.

If you're making traditional chicken alfredo, serve the linguini noodles topped with alfredo sauce with strips of chicken on top or on the side.

If you're making chicken alfredo casserole, pour the sauce into a greased casserole pan.  Add noodles and chicken and stir to combine.  Now you can freeze the casserole (cover securely and freeze up to a month), refrigerate overnight (or until you're ready to bake), or bake immediately.  If frozen or refrigerated, let the casserole thaw first or lengthen the baking time.  Bake at 350 for 35-40 minutes, until noodles are heated through.
Melissa at 7/21/2011 07:00:00 AM