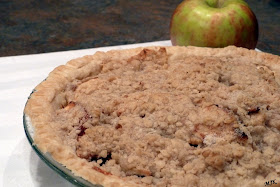 As you know, one of Mike's favorite desserts is his Ma's Apple Crisp. He would probably say that his next favorite dessert is Apple Pie.  He's all-American I tell you!  When I ask him what he would like for dessert, 9 times out of 10 he would request some kind of pie.  He's not a cake person (bummer...because I am!), or much of a brownie lover either.  But give him a big slice of pie with a scoop of ice-cream and he's happy!

When we went apple picking this fall, one of the two things Mike requested was an apple pie, of course!  I was more than happy to oblige, but I had to admit, I can probably count the amount of pies I've ever made on 1 hand.  We, of course, decided it was time to change that!  I used my go-to pie crust recipe and a basic crumble topping to create this pie.  Though I wish I had use at least one more apple in the filling (mine cooked down quite a bit), we were thrilled with how the pie turned out, and I'm sure I'll be making many more.

I waited to post this pie recipe, because I knew of a very exciting party being hosted by Cheryl, of Tidy Mom.  Come join Love the Pie with TidyMom  sponsored by Cherokee USA, Le Creuset, Wilton, Bags by Bloom and  Harvard Common Press!!! 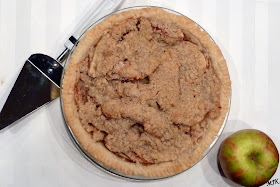 1. Combine flour and salt. Cut in shortening until crumbly. Gradually add water and stir until a ball forms.

2. Cover and refrigerate 30 minutes, until it's easy to handle.

4. Toss apples with cinnamon and sugar until coated.  Place apples in pie crust.

5. In a small bowl, combine flour, sugar, and butter until crumbly.  Sprinkle on top of apples.