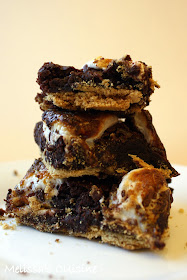 What is better than an ooey-gooey brownie? How about a brownie with toasted marshmallows on top?  Oh, and graham crackers on the bottom. It's a s'mores brownie!

I've had this idea churning in my head for a while.  It started as a s'mores cupcake idea, but then since I was short on time, it morphed into s'mores brownies. I cheated and used a boxed brownie mix, but you could certainly make your favorite brownie recipe.  I brought these on our youth group retreat a couple of weeks ago and they were a hit!

As a side note: I made these in a non-stick pan that you can't use a knife in.  Because the bottom is graham crackers, it took a bit of work to cut these brownies with a plastic spatula.  I'd recommend either breaking the graham crackers into smaller pieces if you must use a non-stick pan, or baking these in a glass pan so you can use a sharp knife! 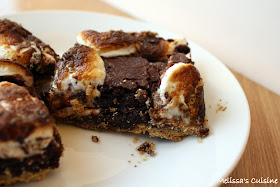 2.  Make the brownie mix according to the directions on the box.  Pour the brownie batter over the graham crackers.

3.  Bake at 350 for 25-28 minutes (or according to the directions on your brownie mix box), until a toothpick inserted in the middle of the brownies comes out mostly clean.

4.  Remove the brownies from the oven and turn your oven onto broil.

5.  Sprinkle the halved marshmallows on top of the brownies and place under the broiler for about 1 minute (watch closely!), until the the marshmallows are golden brown.