What I Ate In Chicago

A couple of weeks ago, Mike and I took a trip to Chicago.  We've been there before for our first anniversary and we loved the city atmosphere.  This time, we went for our "babymoon"--we know that once our baby arrives in July, we won't be traveling much for a while, so this seemed like a good chance to get away.  We live about 3 hours away from Chicago, so we drove about halfway and then took the train the rest of the way.  We love to travel by train, and then we didn't have to worry about driving or parking in the city!

Our hotel was right on the Magnificent Mile, so after checking in, we headed out for lunch.  I had told Mike that I absolutely wanted to go to Chick-fil-a for lunch one day.  I got lucky and we headed there for lunch on Friday.  It was our first time eating there (the closest Chick-fil-a is 80 miles from our house) and it was everything we anticipated.  We both had a chicken sandwich (Mike's was spicy) and fries--I loved their fries!  I also really liked the addition of pickles on their chicken sandwich! 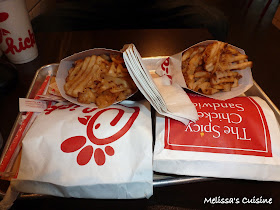 For dinner we headed to another restaurant neither of us had been to before, Rainforest Cafe.  Mike's co-worker is from Chicago and recommended that we eat at Rainforest Cafe for the experience.  Mike and I were both awestruck when we entered the restaurant.  We were greeted by a large snake, misting waterfalls, and enormous fish tanks.  We were seated next to the waterfall and ate our dinner alongside a parrot and family of gorillas.  I ordered one of their specialty items--the BBQ Bacon Cheeseburger. I loved the onion ring that was served on the burger (though I did eat it separately to make the burger size a little more manageable).  Mike ordered their Flying Dragon Pepperoni Pizza, the crust was thin and the amount of toppings was perfect.  Plus, it tasted good cold a few hours later! 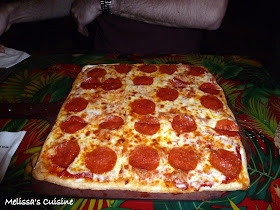 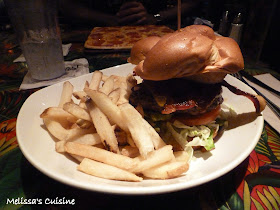 Saturday morning, we headed out to the restaurant voted number one for breakfast in Chicago, Yolk.  Being the breakfast lover that I am, I knew we had to pick a great place to eat breakfast.  I ordered the Peach Cobbler Crepes.  They were delicious, and the portion size was huge, but by time I finished I was sick of the orange flavor from the Grand Marnier.  Mike had the Countryside Skillet, which he really enjoyed. 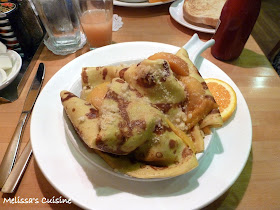 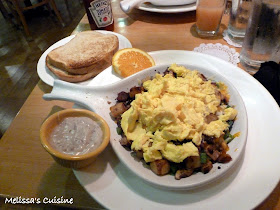 After our enormous breakfast, we really were not hungry for lunch.  We did some shopping and walked down to the Navy Pier.  By this time it was about 3pm and we still hadn't eaten. We ended up stopping in the food court and Mike got McDonald's and I ordered a Chicken Gyro from Greek Delight.  It was delicious!  As you can imagine, we were not hungry for dinner.  We thought about just getting ice-cream from Ghiradelli's, however the cost and lack of seating deterred us from that plan.  We ended up heading back to our hotel and enjoying a couple drinks and appetizers at the M Avenue Lounge.  It was the perfect amount of food to satisfy us for the night.

Sunday morning was Mother's Day, and we hadn't thought about that in advance, so the restaurant we wanted to go to was booked.  I had seen a restaurant as we were walking around that intrigued me, so we headed to e.leaven for breakfast.  This restaurant was more casual than we had anticipated, and we ordered at the front counter and our food was brought out to our table.  I ordered the Banana Bread French Toast--thick slices of banana bread topped with bananas.  It was delicious and so filling! Mike wanted something smaller than the day before, so he went with a breakfast bagel.  He really enjoyed his breakfast as well. 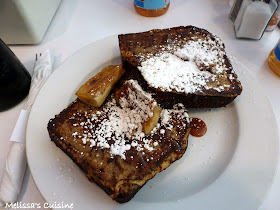 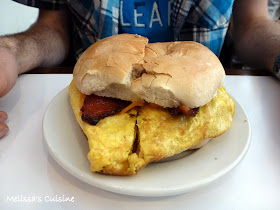 After breakfast, we packed up and headed back to the train station to head home.  We had a great weekend of relaxing, shopping, and eating great food!
Melissa at 5/24/2013 08:45:00 AM