A flavorful mix of chicken and barbeque sauce on top of a crunchy chip.  It's a great appetizer for game day! 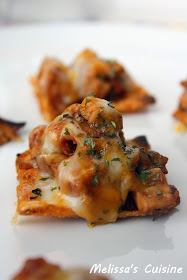 The Superbowl is just over 3 weeks away and, if you're like most people, you're probably expecting to munch some delicious appetizers while watching the game.  These BBQ Chicken Nachos are the perfect finger food and I know I will be making them for our Superbowl party (even if it's just the 3 of us!)

When SunChips contacted me and asked if I would be interested in sampling their new Sweet & Spicy BBQ chips, I jumped at the opportunity--mostly for Mike.  He loves BBQ chips and so I knew these chips would be a hit with me.  I, on the other hand, am not typically a fan of BBQ chips, so while I planned on trying a few, I didn't think I would be the main person reviewing the chips.  But, I was pleasantly surprised at how much I enjoyed these chips!  They aren't overpoweringly BBQ flavored, nor do they have the fake BBQ taste.  It's safe to say that SunChips has won me over on their BBQ chips!

Along with the chips, I received a recipe booklet filled with ideas for the chips.  Now, usually, I'm an eat-my-chips-plain kind of girl.  I've never really thought of putting anything on top of my chips or using them in a recipe, unless you count pickle dip or a big plate of nachos.  But when I saw their recipe for BBQ Chicken Nachos, I was immediately intrigued.  My version is a very simplified version of the one in the recipe book (due to lack of ingredients on my part), but it was delicious!  I don't know if I'll ever eat chips plain again... 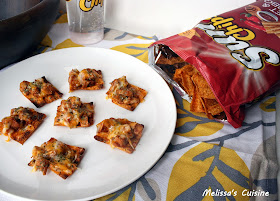 1.  In a bowl, combine the diced chicken and BBQ sauce.

2.  Place chips on a baking sheet and scoop some of the chicken mixture on top of each chip.

4.  Place under the oven broiler for approximately 3 minutes, until the cheese has melted.

Disclaimer:  I was sent a sample package from SunChips for the purpose of this review.  I was not compensated for this post.  All thoughts and opinions are mine.
Melissa at 1/10/2014 11:49:00 AM