Magic happens when you fry these cinnamon sugar bananas.  The sugar caramelizes around the bananas, leaving you with a delicious treat! 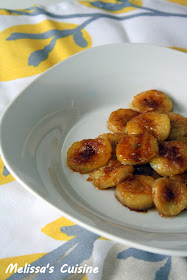 It's a common problem: too many bananas in the house and not enough time (or people) to eat them!  Typically when I am found with too many bananas, I'll whip up a loaf or two of banana bread.  Lately, I've been pureeing the over ripe bananas and making food for Summer.  Girl loves her fruit!

Last week I had just one lonely banana that needed to be eaten.  I had recently seen a recipe that looked delicious, and so I decided to give it a whirl.  These pan fried bananas were amazing!  They're coated in a small amount of cinnamon and sugar.  When you fry them, the sugar caramelizes and turns the bananas into something amazing!

I ate my fried bananas on their own with my breakfast, but I think they would also taste amazing on top of pancakes, waffles, oatmeal, or even as an ice-cream topping! 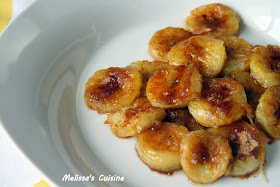 2.  Combine the sugar and cinnamon in a small bowl.

4.  Add the banana slices and cook for 2 minutes.  Then sprinkle the bananas with the cinnamon sugar mixture.