The perfect sized two-bite brownie...and cheesecake! No more deciding between your two favorite desserts with this decadent combination! 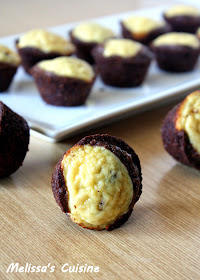 I love baking for other people.  One reason is that I like to try new things, and I love to see other people's reactions when they eat them.  You could say food is my love language.  Another reason is because baking for others gives me the chance to bake, but not to have to eat everything I make.  I'm trying to lose weight, not gain it!

Every couple weeks, Mike and I get together with some of our friends from church for our life group.  We rotate who hosts the gathering and take turns providing the main meal, salad, and dessert.  I often volunteer to bring dessert because it's my favorite thing to make! 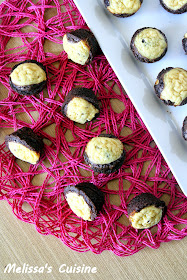 Recently it was my turn to bring dessert and I was craving brownies.  I'd brought Cookie Dough Brownies before and while those sounded good, I wanted to make something different.  I came across a recipe for Cheesecake Brownies and I knew that was the perfect dessert!  It's always nice to have something that isn't messy to eat since we are usually eating on the couch or floor.

These Bite-sized Cheesecake Brownies are incredibly easy to make!  I "cheated" and used a boxed brownie mix because I didn't have a lot of time, and let's face it, they're pretty delicious.  The cheesecake mixture came together quickly and within minutes, my brownies were in the oven.  I was able to mix, bake, cool, and photograph these brownies all while Summer was napping.  That's a win in my book!

I had to sample a few brownies of course while I was photographing them.  I won't tell you how many I tried...  I came home with an empty tray that night--a sure sign of a delicious dessert! 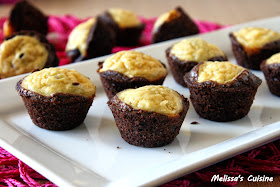 1.  Mix brownie mix according to the box's directions.

Allow brownies to cool at least 10 minutes before removing from the tin.  Store in an airtight container at room temperature or in the fridge.