This Blueberry Buckle is chock full of sweet and delicious blueberries. Eat it for breakfast, dessert, or anything in between.  It's mostly fruit so it's healthy, right? ;) 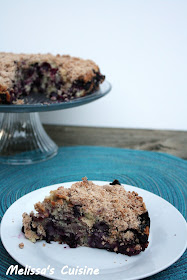 Sometimes things don't go as planned.  Potty training, for example.  I read waaayyy too many success stories from the 3 Day Potty Training Method that I became convinced that it would work for Summer.  However, I have a very stubborn strong-willed child and it became clear rather quickly that forcing her to constantly sit on the potty was not going to work.  We're currently on day 3 (day 1 with no accidents!) but I wouldn't consider us anywhere close to being fully potty trained.  Any success stories to share with me? 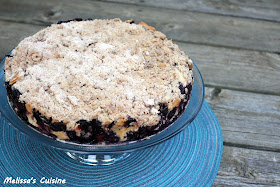 Another thing that doesn't go as planned is pretty much any time I try to bake in my oven.  Sometimes what I'm making comes out just perfectly.  Other times, like with this Blueberry Buckle, it turns out disastrously (luckily, I was able to save this delicious buckle!)  I followed the directions for this cake, baked it at the right temperature for the correct amount of time.  Pulled it out, checked it with a knife in the center which came out clean, so I set it on the rack to cool.  A few hours later I took the cake outside to photograph and cut into it, only to discover the entire center of the cake was still batter!  Oh no!  I put it back in the over, but it took nearly an hour longer before the cake was completely cooked.  Thankfully the top and sides didn't burn and the cake still turned out delicious.  My love-hate relationship with my oven is very much on the hate side right now. :( 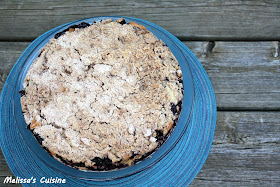 I found this delicious recipe on Sarah's blog, The Pajama Chef. As soon as I read Sarah's introduction where she says "I'm all about healthy delicious recipes with a side of indulgence", I knew that I would have no trouble finding a recipe to make for this month's Secret Recipe Club.  I found a variety of delicious recipes that I wanted to make, like Chocolate Chip Zucchini Cake and Cinnamon Sugar Apple Cake.  But I had just gone blueberry picking and so I was specifically on the hunt for a delicious blueberry recipe.  I saw her recipe for Blueberry Buckle and I knew I'd found my recipe.

This recipe calls for 5 (yes, 5) CUPS of blueberries.  Yes, that's a lot of blueberries. But I think that's what makes this cake so amazing.  Every single bit is full of blueberries, not just a few here and there throughout the cake.  There's not much cake compared to blueberries, so it's actually a pretty light breakfast or dessert.  It's super easy to make, and as long as your oven works properly, it bakes up in about an hour.  You'll want to make this again and again...I promise you won't be disappointed! 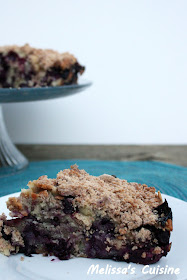 1.  In the bowl of your stand mixer, cream the butter and sugar until light and fluffy, approximately 3 minutes.  Beat in the egg and vanilla.

2.  Combine the flour and baking powder.  Add the flour mixture and milk to the butter mixture, mixing until just combined.

3.  Gently stir in the blueberries.  Pour into a well-greased 10" springform pan.

4.  Prepare the crumb topping by combining the flour, brown sugar,and cinnamon in a bowl.  Cut the butter and vanilla with a pastry blender or two knives.

5.  Sprinkle the crumb topping over the cake batter.

6.  Bake at 350 for 60-70 minutes, until the crumb topping is brown, and a knife inserted in the center of the cake comes out clean.  Cool in the pan for 10 minutes, before removing the sides and allow to cool another 15 minutes before slicing.